OCEANS, THE CRADLE OF LIFE

The oceans are the cradle of life on our planet. It is in the heart of the seas, 3.8 billion years ago, that the first living elements have appeared: bacteria. Life forms then became more and more complex and it is only 250 million years ago that the first living beings came out to start the conquest of terrestrial spaces. Thus, the sea is at the origin of all branches of the animal and vegetable kingdom.

Even today oceans represent the biggest reservoir of fauna and flora on the planet. And they provide us with food and medicines, regulate the climate, and are a source of work and leisure for hundreds of thousands of people. But that’s not all! As oxygen generators and crucial actors of fresh water on Earth – thanks to the water cycle, oceans and seas contribute daily to our wellness.

The popular belief states that forests are the “lungs of the Earth”. But oceans also allow us to breathe. Indeed, more than 50% of the oxygen present on the planet comes from the sea. How is that possible?

Terrestrial plants produce the oxygen we breathe thanks to the natural mechanism called photosynthesis. What is less known is that the photosynthesis takes place at sea too thanks to the phytoplankton. Phytoplankton is a large set of billions of microscopic algae that live in the oceans. These algae play the same role as plants on terrestrial land. Even tiny, phytoplankton releases more oxygen into the air than all the forests of the world.

Like plants, phytoplankton also needs carbon, sun, mineral salts and chlorophyll to perform photosynthesis. While oceans can go down to more than 11 000 meters under the sea level, photosynthesis occurs on weak depths where the sunlight can enter the water. The principle of photosynthesis is shown in the following scheme.

OCEANS, FAUCETS OF THE PLANET

The present water on our planet travels permanently. It makes an uninterrupted circuit between the soils, the oceans, the lakes, the rivers and the sky: this is called the water cycle. Heated by the sun, world waters evaporate, forming clouds. Under certain conditions of temperature and pressure, the water contained in the clouds falls back on Earth. It travels through rivers, lakes and soils to return to its starting state. Thus, the oceans contribute daily to our access to fresh water.

Maritime transport, deposits of raw materials, fishing, shipbuilding … Activities related to the oceans are very numerous. Therefore, the sea is of considerable importance in the global economy. One figure illustrates this observation: 90% of world trade goes through the ocean.

In France, more than 300,000 people were working directly for this sector in 2012 (Cluster Maritime Français). And these numbers do not consider the jobs generated by the tourism on the coast. The importance of the sea in the economy is also true throughout Europe. The European Union is the first world maritime economic power. Nowadays, 5.4 million of Europeans work in the maritime sector. In addition to the plane, the train or the trucks, shipping is constantly linking men. This statement is mainly due to the cheaper cost and the high capacity of ships to transports goods, especially resources such as petroleum. If a plane can transport 2.4 billion of tons of goods per kilometer, a ship can take 6.9 billion of tons of goods per kilometer.

Finally, oceans have another major economic attractive reason: the sea floor contains extensive resources and is real tanks of raw materials. They are thought to contain a great quantity of world reserves of ores and rare metals like copper, cobalt and zinc. But also, significant hydrocarbon reserves – oil or natural gas – essential resources in our daily life and of our economy.

AN OCEAN OF INNOVATION

What if, someday in a near future, our houses and cities could light up thanks to the energy coming from the ocean? This idea might seem futuristic, yet is not a sci-fi scenario. More than never, many countries are turning to renewable energies. Less polluting, they respond to two of the biggest problems of our time: the fight against climate change and the decrease in non-renewable energy sources. Those exact resources that are daily intensively exploited to produce our electricity, heat or light.

Whatever our activities and wherever we are, we need energies such as electricity, heat or light. Production and routing transformation of energy ensure access to the most basic needs of individuals and human societies. To this extent, hundreds of researchers, scientists, inventors and innovators have been working for years to allow the development of renewable energies, especially marine ones. French electricity production has only 4.6% of it coming from marine renewable energies. Countries have invaluable assets, which are still under-exploited.

Then, why marine renewable energies? Where do they come from? How do they work? Between today’s modernity and challenges of tomorrow, it is useful to understand contemporary issues of development of marine energies in the world. Between inventions and innovations, let’s explore the potential of the ocean!

To send the electricity produced at sea in terrestrial distribution networks electricity using submarine cables is a real challenge. Indeed, submarine connections must consider the nature of soil, depth, strength of the current … And possible interventions in case of problems! To protect these cables, the most used process is burrowing, which involves digging furrows in marine soils to bury them there. These cables can measure several kilometers and be connected at a substation located on the coast. The challenge is to extend the underwater furrows through an underground tunnel to reach the coast. Therefore, offshore wind turbines must be implemented in ideal zones where the source of marine energy is available and whose floor allows the installation of connecting cables to electricity distribution networks. 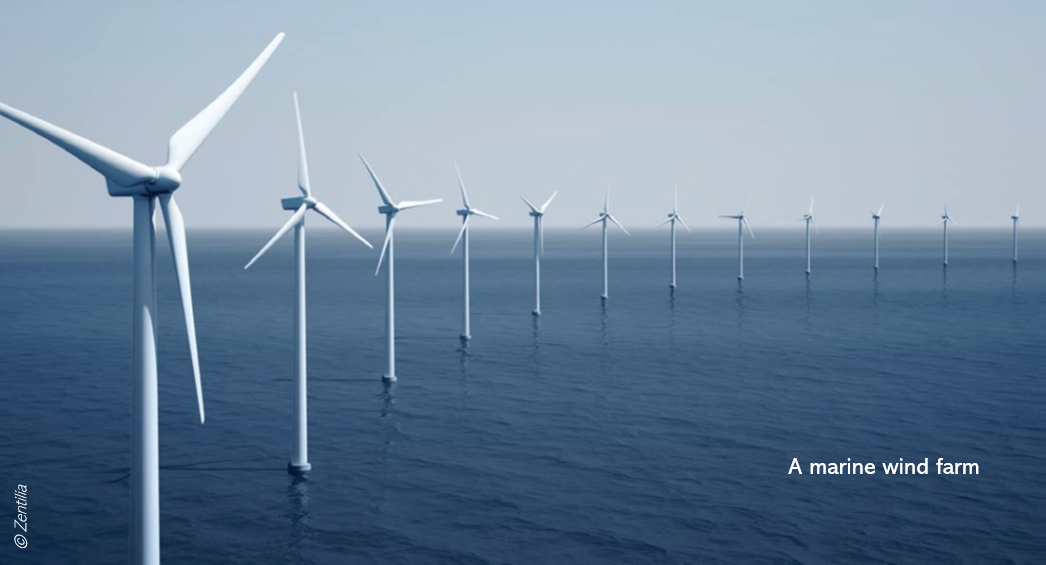 Wave energy is the production of electric energy thanks to the swell. We call “the swell” the successive waves that are formed under the effect of the wind. There are many ways to use the force of the waves (except the surf!): we can capture the movement of waves in surface, underwater, offshore or near the shore, or exploit related pressure variations at their passage. A lot of solutions are therefore under study. The use of waves requires robust machines, capable to resist the power of these latest, as well as a bad weather or violent phenomena such as storms or tsunamis.

In addition to wave energy, tidal energy exploits the zones with strong differences between high and low tides. The more the difference is important, the more the power is great. Tidal mills form a dam. Water movements caused by the tides cross the dam and make turn a tidal turbine system, which creates energy.

Thermal energy of the sea consists in exploiting the differences of temperatures between the bottom of the ocean and its surface. This energy is available in the intertropical areas where the water surface is the most exposed to the heat of the sun. The concept is about sucking simultaneously the very cold water from the bottom of the sea and the hot water from its surface in two pipes leading to an evaporator. Steam is produced by the temperature difference, which allows the production of electricity. This source of energy is very interesting for tropical islands, especially for the volcanic ones.

Finally, but not least, the osmotic energy is the use of the difference of salinity between fresh and salted waters. Salinity is the salt content in the water. In the same compartment, fresh and salted waters are separated on each side of a membrane. An osmosis phenomenon occurs. It means that fresh water crosses the membrane to come soften the salt water, until that salinity be the same on two sides. As a result, water level increases and creates a pressure in the part of compartment where the water is salty. This pressure is used to spin a turbine that allows to produce electricity. It is a little developed technique; only one prototype is tested in Norway, Nevertheless, the technique is very promising.

These energies are not new: as early as 1869, Jules Verne already mentioned it in his book “20 000 places under the seas “. These promising energies were recently tested in Reunion and Martinique. In Reunion, a prototype of marine thermal power station is being tested. But that’s not all! The Saint-Pierre hospital plans to save 90% of the electricity normally used to cool its building thanks to SWAC! The SWAC: the Sea Water Air Conditionned uses cold water pumped at the bottom of Reunion waters to cool the air conditioning circuits, before being discharged into the ocean. Reunion Island has the advantage of not needing to fetch the freshness far away: the ocean is already deep enough and cold about ten kilometers from the coast.

The International Agency of Energy is considering a production of electricity from 40% renewable energies by 2070. But, these energies depend on marine conditions and are not available continuously. Conversely, it can happen that the conditions favor a strong energy production, while the demand is not important. If we want to be able to produce energy on a large scale thanks to the forces of the ocean, you must absolutely find solutions to store it. So that it can be available when conditions do not allow a strong production or during peaks of consumption.

Research around processes storage is a strong issue of marine renewable energies development. It exists different storage modes like STEPs, batteries, capacitors, and hydrogen. The more developed today for renewable energy is the STEP system. The problem is that the installation of a STEP is not possible everywhere.

Today, 16% of French electricity are produced through the renewable terrestrial and marine energies. By 2020, this figure is expected to reach 20%. Countries like Germany have decided to go even further. Berlin provides in fact that 90 to 100% of its electricity will be of renewable origin around 2050. In Scandinavia, the transition is well anchored since the 90’s. All Europe has many assets to reach sustainable running.

A HORIZON OF CHALLENGES

During the twentieth century, human beings mainly used non-renewables resources. The potential of renewable energies, whether marine or terrestrial, has been left out of the face of the ease of use of fossil resources. Among the sources of renewable energies, those coming from the oceans constitute a formidable reservoir: they are abundant enough to cover the consumption of electricity of the whole humanity. The ocean offers particularly complementary sources of energy. However, the cost of the installations that make it possible to use them today remains higher than that of terrestrial installations.

We went through few of the oceans’ secrets. All their potential has not been revealed yet. Many studies are in progress regarding medicines or bio-fuel based on marine micro-algae. But like every new technology, the impacts on the environment are not well-known yet. It is necessary to acquire knowledge about the impacts considering that they may be temporary or permanent, negative or positive. To this extent, an Environmental Impact Assessment (EIA) is the cornerstone of any project that wants to be sustainable. It establishes an “initial state” of the ecosystem so the project does not penalize anyone and benefits to all stakeholders. Humans’ care for their ecosystem highlights also the need of a better governance of both terrestrial and marine environments worldwide.